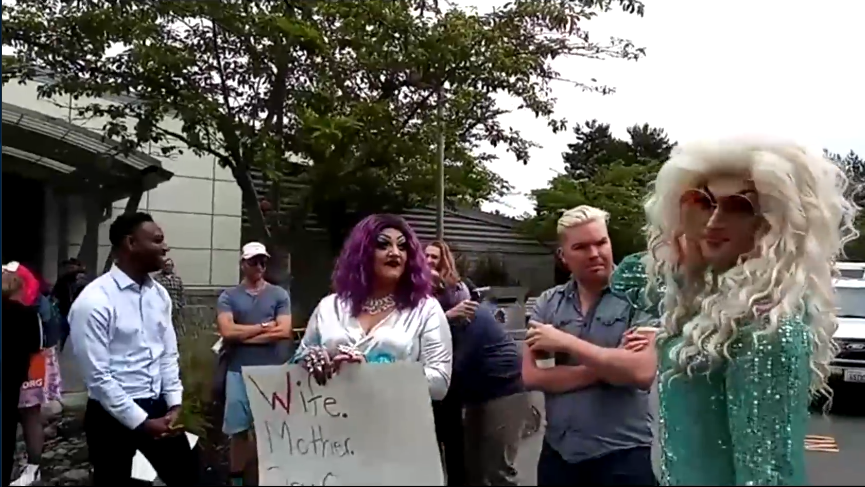 Several supporters surrounded the entrance to the library, cheering as parents and children walked up the sidewalk into the building. Protesters and supporters segregated themselves on either side. The protesters utilized creative techniques such as handmade poster boards, bullhorns and picket signs.

In the early moments of the event, Kris obtained footage from inside the library. The library kicked him out after a few minutes. Later, a kind woman showed up to read bible verses. Many supporters of the event screamed over top of her small voice.

In many cases, the supporters made efforts to silence or shout over the protesters. In one case an activist got in front of the camera and held her sign over it to block the video.

The drag queen who stood outside of the event appeared to be working with Radar Productions because she showed affiliation with Cookie Couture. When Kris asked “So, is it Radar Productions that’s in charge of all this?” Cookie responds “Who are you?”, the 2nd drag queen (purple hair) nervously responds “No Comment, No Comment”. Radar Productions is a San Francisco based activist organization who has recently been exposed as the organizer behind nearly a hundred of these events nationwide.

A street preacher appeared on the hill with a microphone headset and speaker system. He preached before the crowd and prayed for them to see their evil ways. It was no doubt that his voice echoed through the library and into the conscience of the parents who had brought their kids. A few actually appeared to leave the event early.

The Police are Our Friends

At one point, a police officer approached Kris and asked if he works for Infowars. Kris clarified his support for their news organization and the officer said “The only reason why I asked is because I watch their stuff from time to time, depending on what they are talking about”. It was a watershed moment of truth and vindication. Kris asked the officer what he thought about the event, “I’m just here to make sure everyone’s first amendment is protected”, the officer said.

As children and parents left the library at the end of the hour, supporters chanted “Love not Hate”, cheering and clapping in celebration of the attendees. Notably, many of the children were only accompanied by only one parent, whom in most cases was the mother. Some of the parents walked swiftly down the sidewalk to get their kids away from the crossfire of the opposing sides.

King 5 News interviewed Kris towards the end of the event, “I don’t want my tax dollars going to this. Why impose this lifestyle on a child? Children will grow up and learn their own opinions all by themselves, there is no reason for this”, Kris explained to the news anchor.

As the event came to a close, both sides became more vocal and the police presence increased from one officer to at least four. Kris proceeded to bullhorn the event as so did many other protestors.

A police officer escorted Cookie Couture out of the library and to his vehicle following the event.

Kris broadcasted to Facebook live for approximately two and a half hours. The live video was reported and banned as hate speech after reaching 30,000 views. Luckily, our technician was able to recover the footage to share with you here, uncensored.