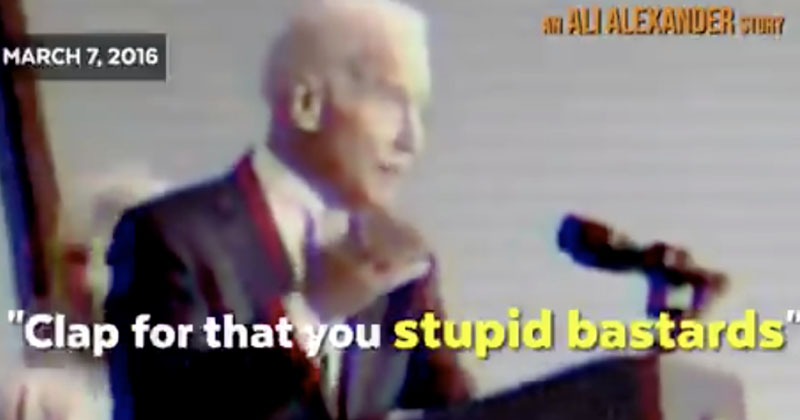 Video from 2016 has surfaced showing Joe Biden denigrate U.S. soldiers to their faces during a speech in the Middle East, calling them “stupid bastards” and “slow.”

“Notwithstanding what you might have heard about me,” Biden said, “one, I have very good judgement, I married Jill, and two, I appointed Johnson to the Academy, I just want you to know that. Clap for that, you stupid bastards.”

Biden’s comments are remarkable given he hammered Trump in recent weeks over a now-debunked hit piece by The Atlantic claiming Trump had referred to fallen troops as “losers” and “suckers” in 2018.

n fact, Biden made such a vicious attack ad based on The Atlantic’s fake news that Trump called him a “pathetic human being.”

“Pathetic Joe. He’s a pathetic human being to allow that to happen,” Trump said earlier this month. “But you know the good part? Now I can be really vicious. Once I saw that ad, I don’t have to be nice anymore.”

Don’t expect the same moral outrage by the media over Biden’s proven remarks the way they did for Trump.

Joe Biden has been caught yet again in a gaffe about America’s troops.