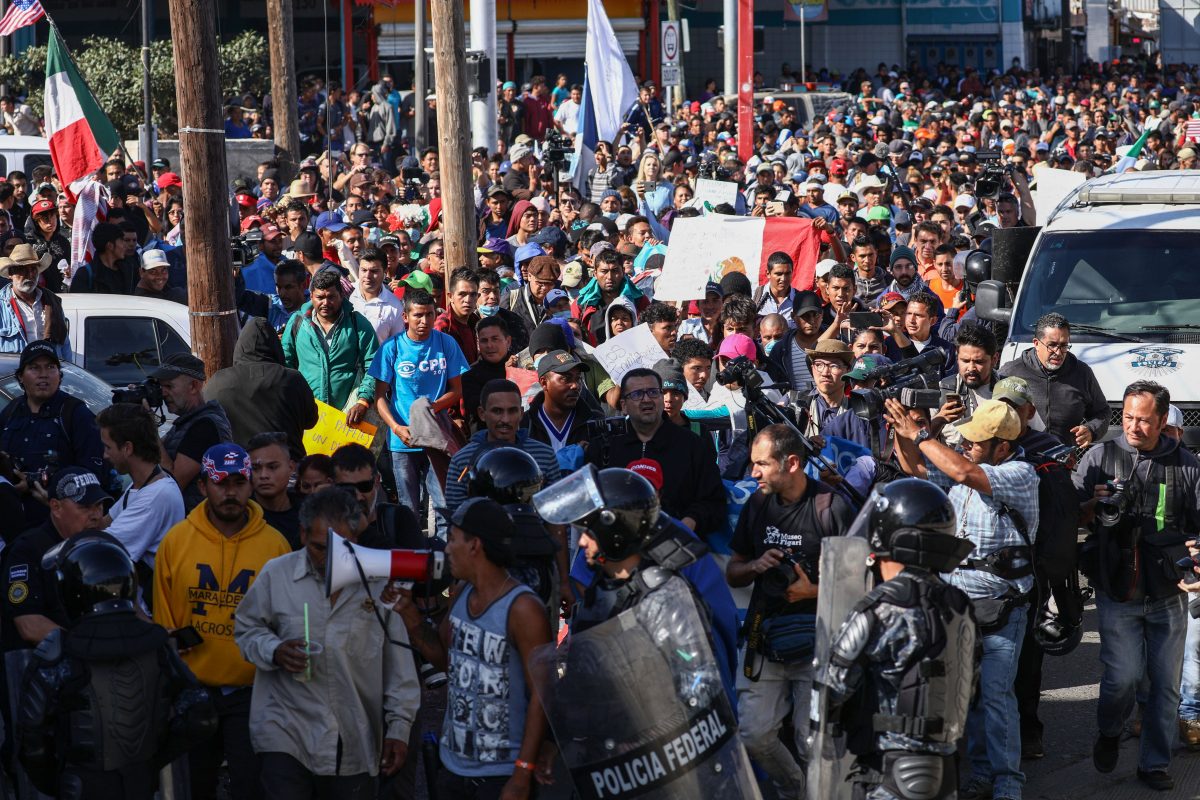 Communism Expert on What’s Behind the Push for Open Borders

WASHINGTON—As Congress holds hearing after hearing without any substantive fixes to immigration law, tens of thousands of illegal aliens cross the southwest border every week. Most families don’t bother claiming “credible fear” to Border Patrol anymore, knowing they’ll be released anyway if they have a child with them.

The Epoch Times sat down with Trevor Loudon, a communism expert and contributor to The Epoch Times, to discuss the effects of congressional inaction and the possible reasons behind it.

The Epoch Times: What is really going on?

Trevor Loudon: This is an orchestrated, communist assault on America, to destroy America’s borders, to create confusion in America, to overwhelm the system politically. Because America is [the communists’] main enemy, and if you can’t bring it down through nuclear weapons, you bring it down through illegal immigration, which is maybe just as effective in the long run.

You can see what 15, 16, 20, 25 million new Democratic voters is going to do to this country. You will lose Texas, you’ll lose Florida, you will lose Georgia, Arizona, North Carolina. There will never be, ever, another Republican or conservative president in our lifetimes. You will have a one-party state in America. And that is the plan. That is why they are doing this.

This is Marxist. This is Leninist. And this goes back to American politicians cooperating with hostile foreign powers in the destruction of America. And their No. 1 weapon is illegal immigration and overwhelming the border. That’s what they’re doing.

If that’s not a national emergency, I cannot comprehend what is. What could be more pressing and more dangerous than this?

An interview with Trevor Loudon, author of “The Enemies Within: Communists, Socialists, and Progressives in the U.S. Congress”

The Democrats, 25 years ago, were the party leading the charge against illegal immigration. They were the party. You look up on C-Span and see speeches by Harry Reid and Bill Clinton condemning illegal immigration in the harshest terms: “This is a national security threat. This is taking the jobs of American workers. This is destroying their livelihood. We must end this.”

They sounded like Tea Party guys. And now, they’re completely in favor of it, because they have so destroyed their own base among the sort of Pennsylvania union guys, the middle class in this country. They’ve so destroyed their own base, they have to import new voters. And where are they going to come from? Well, there’s a very easy source for that.

Epoch Times: How would border security look under a Democrat president in 2020?

Mr. Loudon: The borders would be dissolved, effectively. There’d be no effective border security. And all the Democrat candidates are united on this—all of them. Not one of them has made a stand against what is happening on the border. They’re all for amnesty, they’re all for welcoming illegals over the border. So you would see the end of America as we know it, because we would get so many million people coming over. They would be given citizenship and voting rights, and they would vote for the party that let them in.

And so, ultimately, these guys, they want power. These Democrat leaders, they’re going to live in gated communities. They’re going to be living high off the fat of the land. All the rest of us will be living in poverty and destitution. But that’s okay. Every communist dictator lives in prosperity. Every communist dictator has all the luxuries they want. They don’t care what happens to us. We’re just expendable to them.

And so, they have the same mentality. They want power at any cost. And they know illegal immigration is hurting American workers. They know it’s taking jobs from young black kids and black communities. They know it’s bringing disease and public-health dangers. They know the open borders are killing 60,000 Americans a year through the importation of fentanyl from China, and cocaine and heroin from South America. They know all that. But they’re still willing to go along with it, because power comes first. And this is the road to absolute power for them.

Mr. Loudon: MIT says there’s 22 million illegals in the country now. Some people said there’s 40 million, but MIT is a reputable organization—we’ll go with their figure. And we all know, on present patterns, they will vote 80 percent Democrat, at least. Well, that gives the Democrats 15 or 16 million votes just straight off the top. And when you consider that Mitt Romney lost his election by 2.5 million votes and Donald Trump won by 200,000, thanks to the electoral college, and actually lost the popular vote by 3 million.

The end of the Electoral College would make mob rule even more endemic. It would remove one of our very last protections against mob rule. And make it clear, America was never a democracy. It’s a constitutional republic, where the will of the majority is tempered by things like the Electoral College, to make sure big population centers don’t dominate small population centers.

So if they are in control of the voting process, they’re in control of counting the votes and apportioning out electoral districts, they get rid of the national popular vote. No matter how unpopular they become, no matter how cruel they are, how corrupt they are, and how much the economy crashes, they can never be voted out of power. They will have a permanent blank check on power in this country. And even a die-hard Democrat should be terrified of that situation.

You know, to give one party a monopoly on this country—I don’t care if it’s the best political party in the world—if you give them a complete monopoly on power for all time, it’s a recipe for corruption and tyranny.

Because power corrupts and absolute power corrupts absolutely. I don’t care if you had Saint Peter leading the party. It wouldn’t matter. You have a monopoly on power, you become corrupt. And everybody in this country should be terrified of that prospect.

Mr. Loudon: Well, because these people believe they will be the elite. So you’ve got a whole voting base who has no comprehension of the consequences of what they’re doing. They still think they’re voting for Harry Truman and JFK. They don’t see that this is an either/or situation—that the Democrats are on the verge of an unbeatable, permanent majority.

This is a race against time. What’s it going to be, a million this year? One and a half, 2 million next year? Because it will increase as the election, especially if it looks like Trump’s going to win again. You know, it will increase, because people want to get across the border while they still can. So, yeah, you’ve got a major crisis on the border.

We saw a million Muslims driven into Germany recently, with all of the social consequences that that entailed. Well, the pool of potential refugees from Latin America is way bigger than the people who come out of Syria.

How many people live below the border? You’re talking a couple hundred million in Latin America. You could have 3, 4, 5 million people trying to get in.

I think President Donald Trump is hoping it’ll slow down, but if it doesn’t, I think he’s going to have to be tough on Mexico. Until he can get control of the U.S. House again, I don’t see how he’s going to stop this. But he has to.

But even that’s not going to stop the problem entirely because people will still claim refugee status under existing law.

I think the answer must be to put huge pressure on Mexico to stop the problem internally, because they could do it if they wanted to. And by not doing it, they’re basically declaring war on the United States—and that needs some tough measures.

Epoch Times: Border Patrol is expecting to apprehend 1 million illegal aliens this year. Everything is overwhelmed. Does this relate to the Cloward-Piven strategy?

Mr. Loudon: Yes. The Cloward-Piven strategy was originated by two members of Democratic Socialists of America—Frances Fox Piven and her husband. And they came up with the idea in the ’60s: How do we get socialism? Well, we overwhelm the systems. We overwhelm the welfare system.

And they went out and—deliberately, in New York—signed up as many people for welfare as they could, to basically break New York’s budget. Because, they reasoned, well, when it all comes crumbling down, the only alternative is socialism. Well, this strategy was extended to the voting-rights movement.

But I think, ultimately, it’s even deeper than that, you know. This whole move for illegal immigration—amnesty, dissolving the border—goes right back to the Soviet days when the Communist Party USA was working on the border to bring people across, to train up the sort of “amnesty movement” people. I’m talking, back in the ’70s, or even before that. And so, with people like Bert Corona, the famous Communist Party member from California who was heavily involved in this.

He had a whole network across the southern border states of Communist Party members and radicals who were fostering this movement because it was designed—there’s two aspects of it: One was to fill the southern states with Mexicans and Latin Americans to eventually wrest southern states back [to] Mexico. And also to increase the Democratic Party rolls.

And so, Corona was working with people … I’ve got a letter from the ‘70s asking for Corona and Cesar Chavez and others in this network to find promising young Chicano activists to send to Moscow to train at the Patrice Lumumba School, the big training school for foreign communists, to teach them about revolution through promoting Atzlan—the return of the southern states to Mexico.

And then you’ve got Acorn working down in Honduras. The famous Acorn, which is an extension of the Cloward-Piven strategy, it basically developed out of that. And they worked on voter registration all over the states. But now they are, I believe, also driving the caravans up. And then, I’ve been told stories about this, but nothing I can prove, that the Cubans are also involved in this, and left-wing forces in Honduras as well.

This interview has been edited for brevity and clarity.