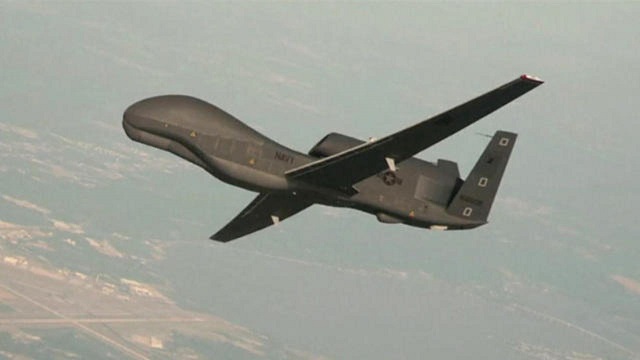 Iran shoots down American drone in “clear message” to U.S.

CBS News U.S. officials say Iran shot down an American spy drone over international waters over the Strait of Hormuz.

Iran claims it shot down a U.S. drone flying in its airspace, and has condemned the alleged “provocative” act and warned of unspecified retaliation.

The drone was shot down hours after Iranian-backed Houthi rebels in Yemen fired a missile into neighboring Saudi Arabia, a key U.S. ally in the Mideast.

Both incidents come amid soaring tension in the region as the U.S. accuses Iran of multiple attacks on tankers.

Both the U.S. and Iran said Thursday that Iranian forces had shot down an American military surveillance drone, but the two sides offered conflicting details on the incident, which is likely to further escalate already soaring tensions in the Middle East. U.S. officials confirmed to CBS News that a high altitude drone on a surveillance mission over the Strait of Hormuz was hit by an Iranian surface-to-air missile in international airspace.

Iran, however, said its elite Revolutionary Guard shot down an RQ-4 Global Hawk drone as it flew over southern Iran. Iran’s Foreign Ministry issued a condemnation of the purported violation of its airspace and warned of a strong reaction to what it called a “provocative” act by the U.S.

The U.S. military has denied that any of its aircraft were operating over Iran at the time, but officials confirmed to CBS News national security correspondent David Martin that an American drone was downed.

It is the largest drone in the U.S. military fleet and is designed to fly at much higher altitudes than other unmanned aircraft — capable of reaching altitudes more than 10 miles over the Earth’s surface.

Earlier this week, Air Force Gen. Paul Selva, Vice Chair of the U.S. Joint Chiefs of Staff, told the Defense News website that the U.S. would not take military action against Iran without broad international backing, “with one specific caveat: If the Iranians come after U.S. citizens, U.S. assets or U.S. military, we reserve the right to respond with a military action. They need to know that, it needs to be very clear.”

Martin said a U.S. Triton drone flying over international waters would qualify as a U.S. military asset. He also noted that if an American drone was shot down over Iranian soil, as Tehran claims, the Iranians should be able to produce wreckage. A U.S. official told Martin that the U.S. has evidence to support its claim the drone was in international airspace when it was shot down.

The incidents come amid warnings that an accident or miscommunication in the Persian Gulf could lead to a conflict between the U.S. and Iran, which have been increasingly at odds since President Donald Trump’s move last year to pull the U.S. unilaterally out of the 2015 nuclear agreement negotiated by his predecessor and other world powers.

CBS News senior national security contributor and former acting CIA director Michael Morell told “CBS This Morning” on Thursday that the downing of the drone as it monitored the Iranian Navy was “another step up the escalatory ladder” by Iran.

The Trump administration has accused Iran of attacking six tankers near the Strait of Hormuz, a vital shipping channel through which about a third of the world’s oil supply sails every year, over the course of the last month. The drone incident came after the U.S. said Iran had fired a missile at another American drone last week, as it responded to the most recent attack on two oil tankers near the Gulf of Oman.

The commander of Iran’s Revolutionary Guard force said Thursday that the shoot down of the drone was “a clear message” to the U.S., and that while the Islamic Republic does not want a conflict with America, it is “ready for war.”

In recent weeks, the U.S. has sped an aircraft carrier to the Mideast and deployed additional troops, adding to the tens of thousands already in the region.

Iran has denied any involvement in the attacks on the tankers in the Gulf. The U.S. has offered mounting evidence allegedly showing Tehran’s involvement as it presses allies — and adversaries like Russia — to join in the condemnation of the Iranian regime over the attacks.

Russia has accused the U.S. of trying to “provoke a war” with Iran, and urged caution in assigning blame for the tanker attacks.

Russian officials have rejected the evidence put forth by the U.S. thus far, and Moscow announced on Thursday that the country’s security services would carry out their own investigation into the attack on tankers in the Gulf of Oman. Russian Security Council Secretary Nikolai Patrushev said the information provided by “foreign partners” was insufficient to draw any conclusions about who attacked the tankers.

“While there is still time, (the U.S. should) stop, think it through, prevent further spiralling towards uncontrollable confrontation,” Ryabkov said, according to Russia’s state-run media. He claimed the “vast majority of the world agrees with this approach and sees no alternatives to it.”

He accused Washington of failing to listen to other nations and said the Trump administration’s actions reflected “the determination to exacerbate the situation.”

Some major U.S. allies have tentatively backed the case against Iran, with Britain and Germany both expressing confidence in the evidence presented by Washington, but also urging restraint and stressing the need for diplomacy over a military confrontation which could quickly escalate.

At a meeting in Paris on Thursday, German Foreign Minister Heiko Maas said the situation was “extremely serious” in the Gulf, with the “threat of war still present.” He said Germany’s preferred approach was “diplomacy first.”

France, meanwhile, said Thursday that President Emmanuel Macron had sent a senior diplomatic adviser to Tehran to try and defuse the tension between Iran and Washington. Emmanuel Bonne held “high-level meetings” on Wednesday in Tehran, “with the aim of contributing to the deescalation of tensions in the region,” Macron’s office said on Thursday, without providing further details.

Iranian-allied Houthi rebels in Yemen have launched bomb-laden drones into neighboring Saudi Arabia, a key U.S. ally in the Middle East, targeting pipelines and other infrastructure. Hours before news of the drone shoot down broke on Thursday, the White House said it was aware of reports that a missile fired by the Houthis had struck what U.S. officials called “critical infrastructure” inside Saudi Arabia. A Houthi-run television station in Yemen said the missile had struck a power station in the southern Jizan province.

Saudi Arabian officials said the rocket fired by Yemeni rebels had struck a desalination plant, but no one was wounded and no damage was caused.

Officials told CBS News’ Martin that the U.S. is taking seriously the attack on the Saudi plant — which in Saudi Arabia is considered critical infrastructure as the arid nation depends so heavily on desalinization for its water supply. Martin said U.S. officials have been concerned about the vulnerability of the Saudis’ desalinization plants, given the proximity of the well-armed Houthi rebels in neighboring Yemen.

White House spokeswoman Sarah Sanders said on Wednesday evening that President Trump was “briefed on the reports of a missile strike in the Kingdom of Saudi Arabia,” adding: “We are closely monitoring the situation and continuing to consult with our partners and allies.”

Iran recently has quadrupled its production of low-enriched uranium and threatened to boost its enrichment closer to weapons-grade levels, trying to pressure Europe for new terms to the 2015 nuclear deal. The Trump administration has urged its European allies not to be cowed by Iran’s “nuclear blackmail.”

All this has raised fears that a miscalculation or further rise in tensions could push the U.S. and Iran into an open conflict, some 40 years after Tehran’s Islamic Revolution.